I’ve had my OnePlus 3 phone since last October. Generally I have been very happy with it, excellent value for money. I’ve had some battery drain issues, especially after upgrading to Android Nougat but it hasn’t been really an issue since factory reset – although battery life is still not the strongest point of this handset. Anyway, I can highly recommend the phone.

However, one annoying feature is the way the volume control works. The steps are simply too large. I don’t listen to music horribly loud with headphones so with a sensitive pair of travel headphones, such as my AKG Y50, I find searching for the ideal level between two steps. At lower step the volume is too low, at next step it gets slightly too high. I am quite sure I was able to fine-adjust the volume by sliding the slider with my finger in my old Nexus 5 but in OnePlus 3 the level is forced into those pre-defined steps.

Apparently, I was keen to know what is this “too large” volume step in numbers. After all, it can be useful to know also when designing your own discrete-step volume control which I am planning to do.

Result can be seen below, audio output RMS level in blue trace and THD+N level in dotted red trace. 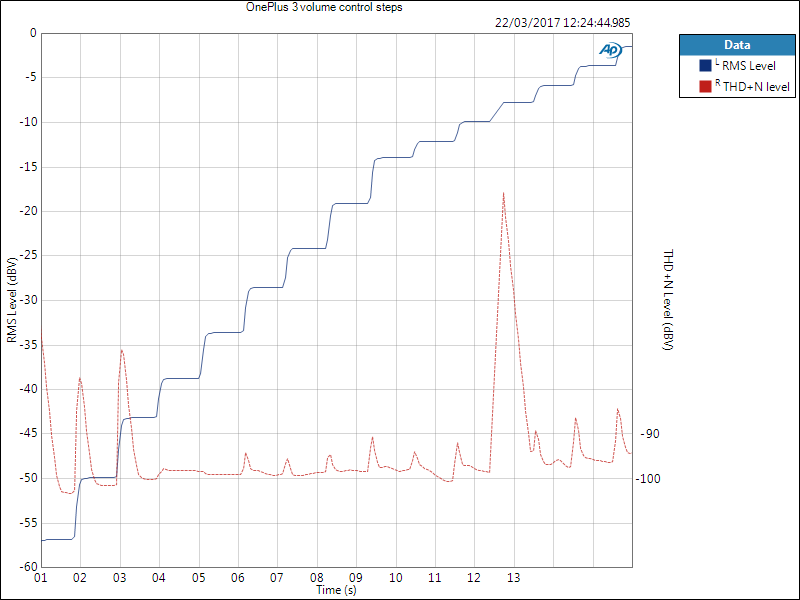 Only 16 steps is used for volume from infinity to -1.5 dBV. The graph above shows the steps from the second -57 dBV step onwards. Two following steps are 7 dB, six following steps 5 dB, and the rest six steps 2 dB. Part of the graph is zoomed in below.

In my use I typically end up using steps 8-10 which are the last three 5 dB steps. And 5 dB is a huge step. Home Hi-Fi equipment typically have 0.5 dB or at least 1 dB steps – I have never seen larger steps in a Hi-Fi device. 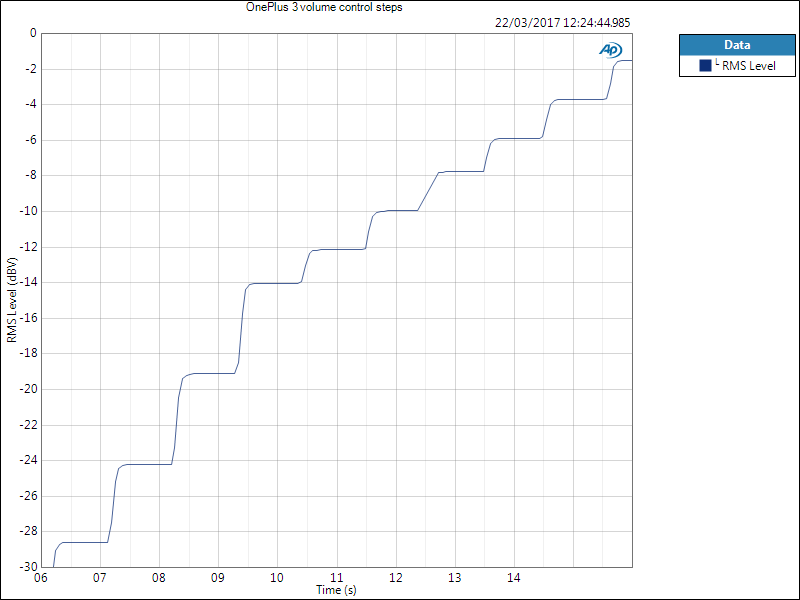 OnePlus3 volume steps in the mid-range are as large as 5 dB.

Ignore the spikes in THD+N, they are just some artefacts caused by the volume change. Audio Precision software also refused to co-operate by hiding all numbers from the right-hand side scale. I have added -90 and -100 dBV marks manually. This just tells that THD+N level remains almost constant regardless of the volume setting – a feature of digital volume control. Only slight increase in level can be seen at higher level. Overall, -96..-98 dBV level is excellent value. The maximum output level is approximately -1.5 dBV, giving THD+N ratio of around 95 dB.

Maximum output level is -1.5 dBV, or 0.85 V. This is enough for most headphones, at least for the likes I would use on the road. For example, my 32-ohm AKG Y50 has a sensitivity of 115 dB SPL/V so you would get around 113 dB with OnePlus 3. However, it is worth noting that sometimes the source material or app may have too low level, as is the case sometimes when watching movies on the road.

5 dB volume step in middle range is simply too large. Whether this is a feature of new Android version or OnePlus 3 software, I hope it will be fixed in the future.

Win an oscilloscope in Keysight Scope Month – like I did last year!