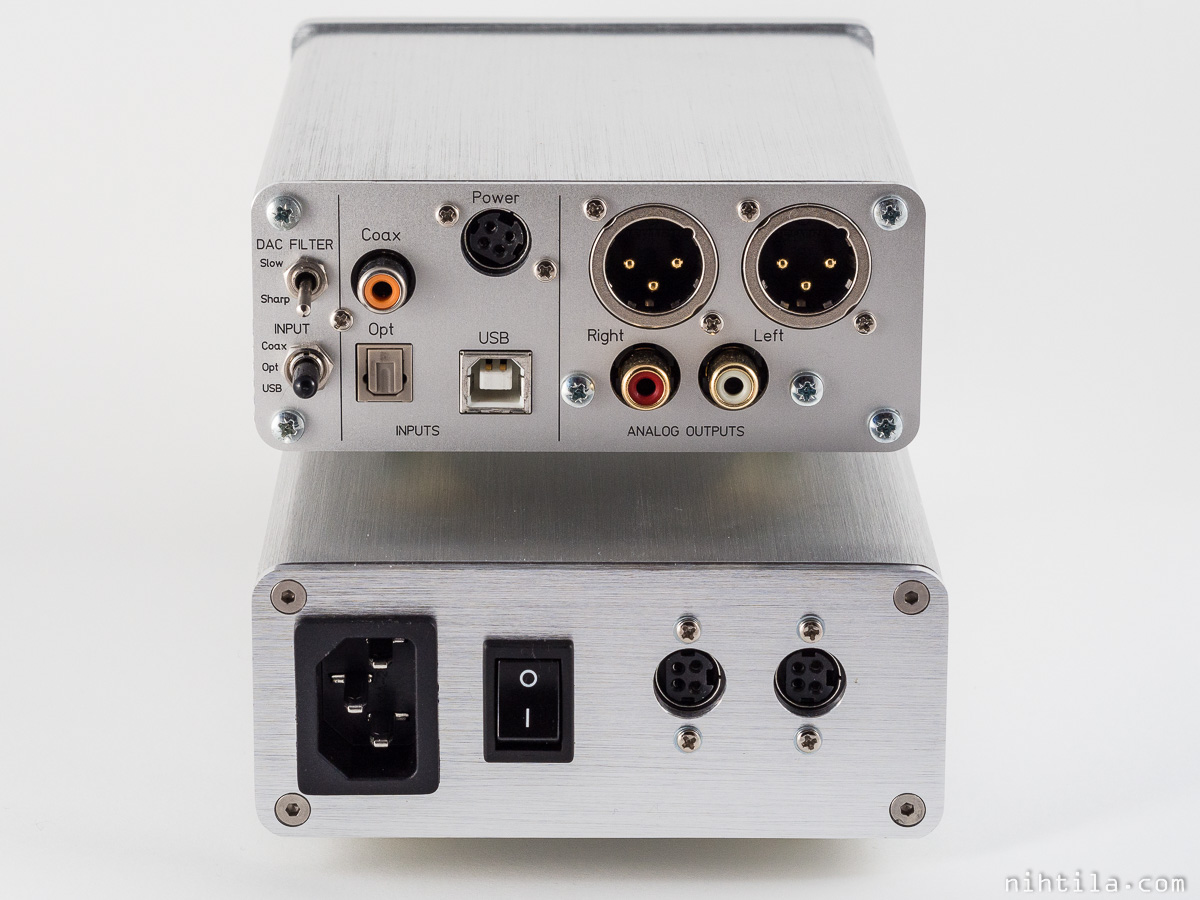 This page does not explain detailed functionality and design of H-DAC and Addon H-PreAmp, see their corresponding pages for more information.

These modules are used in the default configuration presented on their pages. For control, mechanical switches on backpanel and normal potentiometer on front panel are used. One on-off-on type switch selects between the three inputs and normal on-on toggle switch selects filter response. Conventional potentiometer gives nice smooth volume control response so it is a good option when no remote control is required.

The aluminium enclosure is from eBay and backpanel is custom-made from Schaeffer AG. Simple front-panel holes are self-made.

Power connectors are 4-pole mini-DIN DC jacks and plugs from Mouser and Maplin. 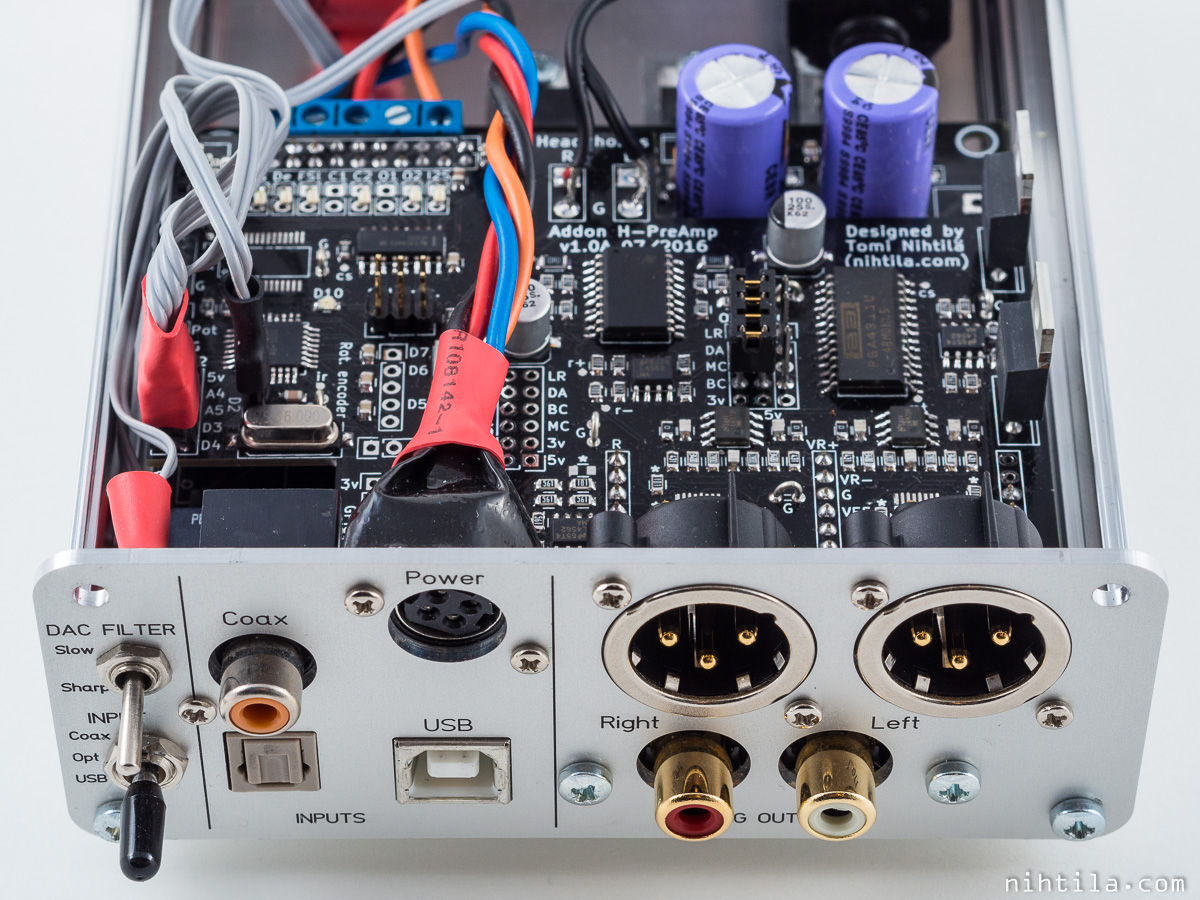 Main regulators are bolted on the chassis bottom to keep them cool. 5 V regulators on H-PreAmp module get touch-hot but it should not be too much even there are no vents. The enclosure gets slightly warm after hours of use but nothing alarming. 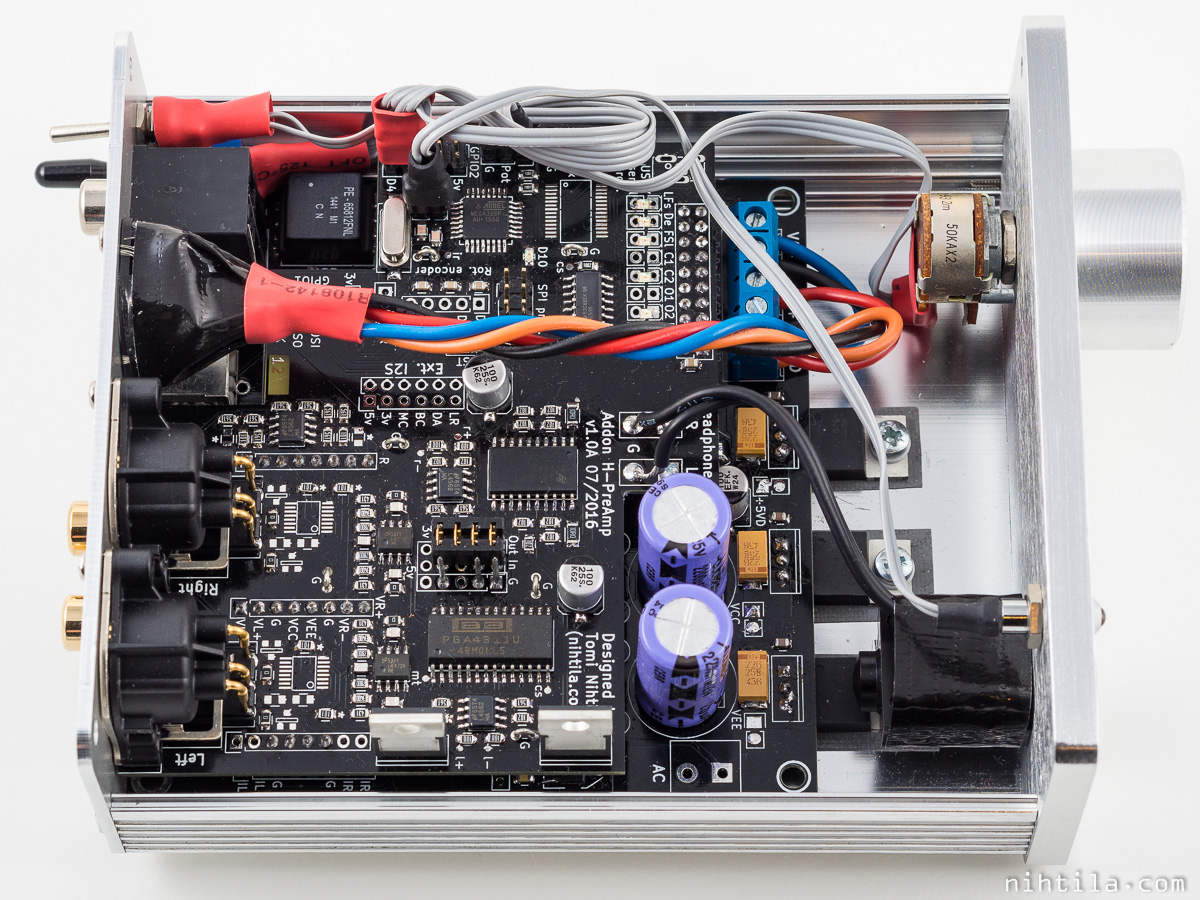 Audio measurements are more of sanity check as detailed measurements can be found on H-DAC and Addon H-PreAmp pages. Basic measurements were performed with Audio Precision APx585 analyser on HP Pre 2016 powered by PSU Pre 2016.

HP Pre 2016 measurements are compared to the results recorded with H-DAC + Addon H-PreAmp with lab power supplies, shown in thinner dotted lines. No surprises were found in any measurements.

I needed to tweak the code for smoother volume control. I am using logarithmic potentiometer and it does not provide good response if decibel values of PGA4311 are controlled directly based on the ADC-reading. Despite its name, logarithmic pot has an exponential transfer function – at first the change is subtle and grows very large at the end of the taper. When adjusting decibel values, this leads to having almost all the range at the very end of the pot range. I added a logarithmic function in my code and tweaked the values for natural response throughout the pot range.

Flatness is identical but there is 0.5 dB difference in level which indicates that after tweaking the potentiometer response it does not get all the way to 0 dB but -0.5 dB (PGA4311 controls volume in 0.5 dB steps). This is easily fixed in software.

I need to check where that 0.1 dB channel difference comes from. 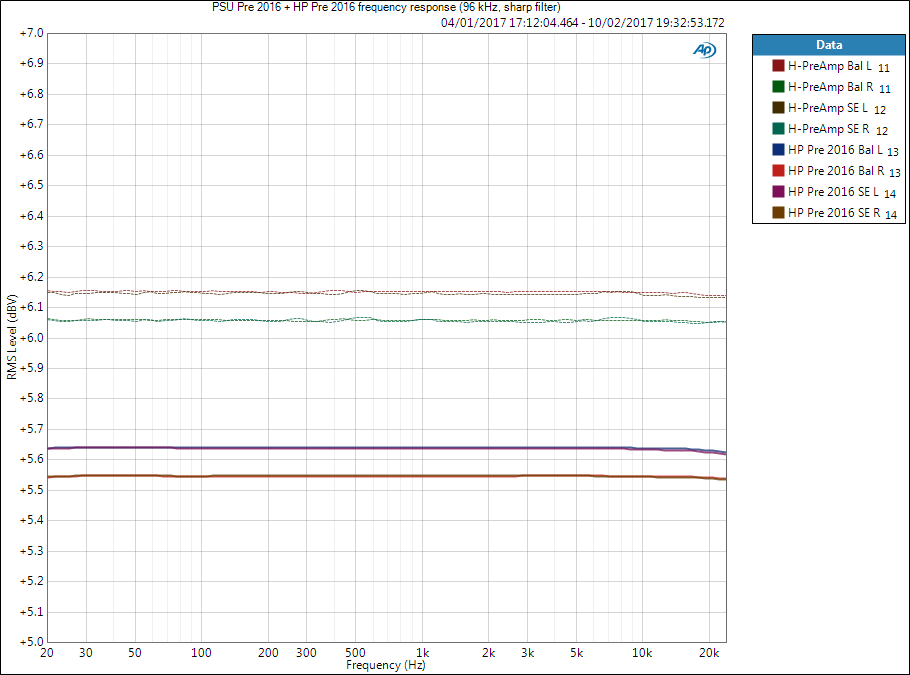 Results are almost identical. The small difference is probably due to the 0.5 dB difference in gain. 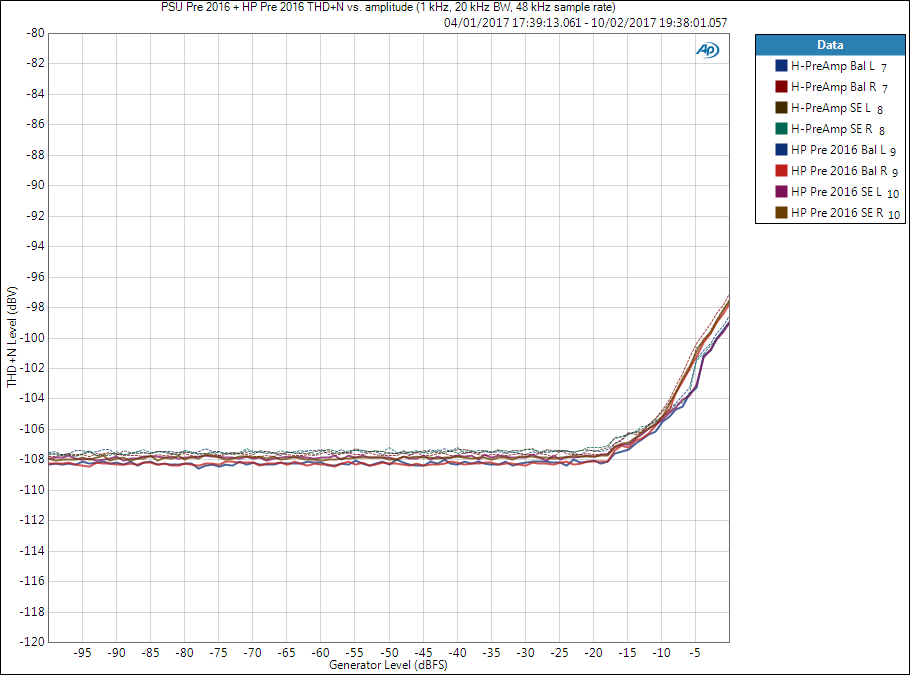 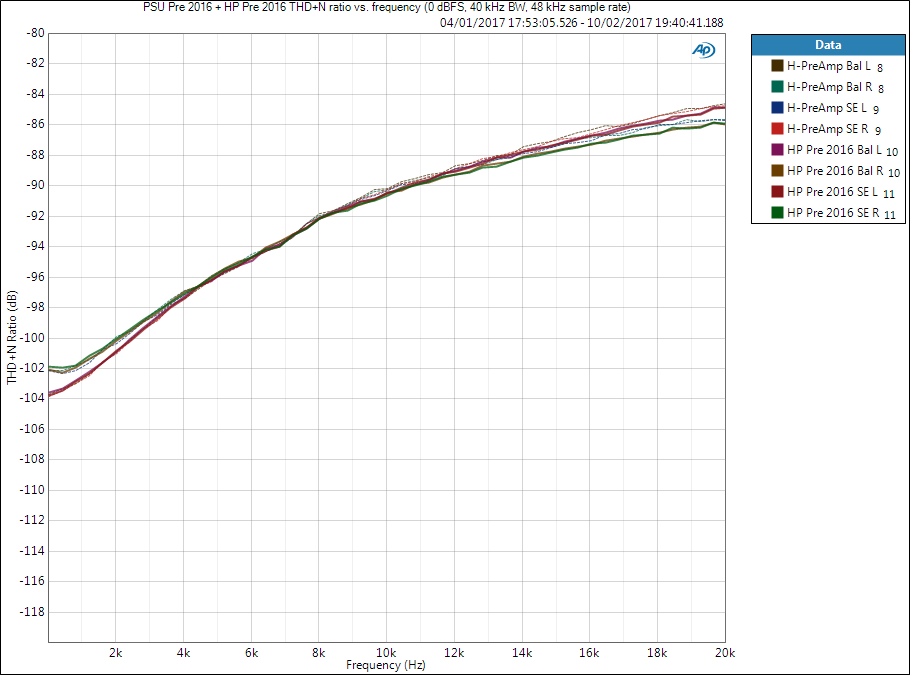 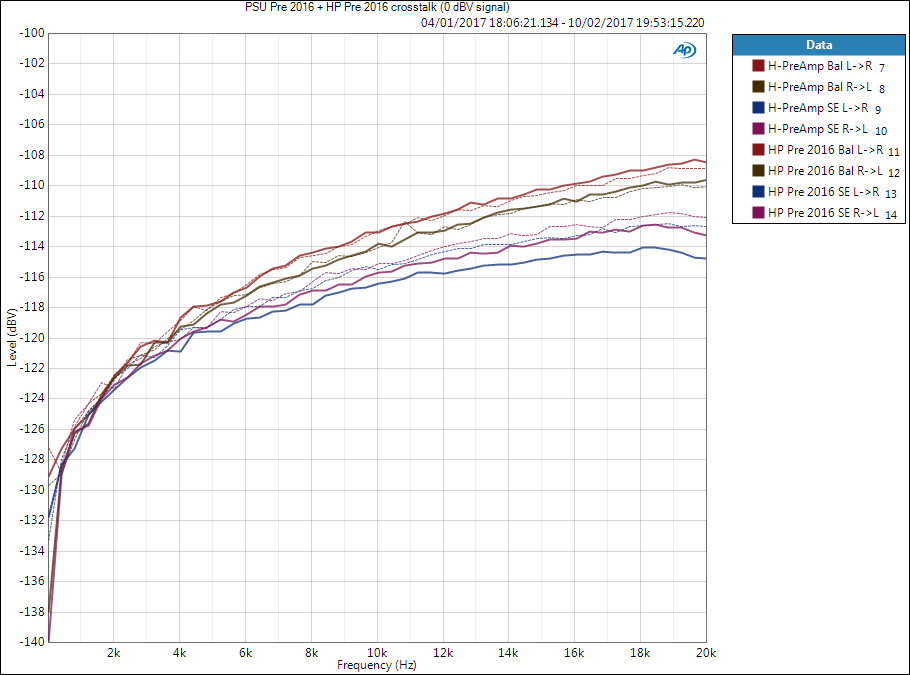 Output pops and clicks when powering the device on and off may be an issue. Both line output and headphone output show significant voltage spikes when power is toggled. When considering HP Pre as a preamplifier it will not cause issues if power amplifier is turned on after the preamplifier and turned off before the preamplifier – which is always recommended. However, as a headphone amplifier the only way to avoid the clicks is to remove headphones when toggling power which is not very convenient. These clicks are very unlikely to cause any damage to your headphones or hearing but they do sound nasty. I will need to start adding some kind of mute circuit to my future designs and I may add it to the headphone output of HP Pre 2016 as well although there will not be an elegant way to do it afterwards.

Measurement results are excellent, showing solid performance almost identical to the H-PreAmp measurements. This PSU Pre and HP Pre have been in use for at least six months when writing this and has shown solid performance and no reliability issues. The only practical inconvenience and possible issue is the power-up and power-down pops and clicks. This is something I need to address at least in future headphone amplifier designs if I do not fix it in this one anymore.