HP TPA is a simple headphone amp based on TPA6210A2 IC and was used to prove the modular headphone amplifier concept. Despite its simplicity, it offers solid performance for both low-impedance and high-impedance headphones.

This is a very simple design, more like to prove the concept of the modular headphone amplifier. As TPA6210A2 is basically a high-power (current-feedback) operational amplifier, thus the circuit is like an opamp buffer.

TPA6210A2 is a dual-amp chip but to still create balanced output a ground lead from feedback point is taken as cold wire. Despite only hot wire is driven, this is a proper balanced output and gives the benefits of balanced interconnection. There is slight impedance imbalance due to amplifier output impedance but it is negligible when high 10 Ω output resistors are used. 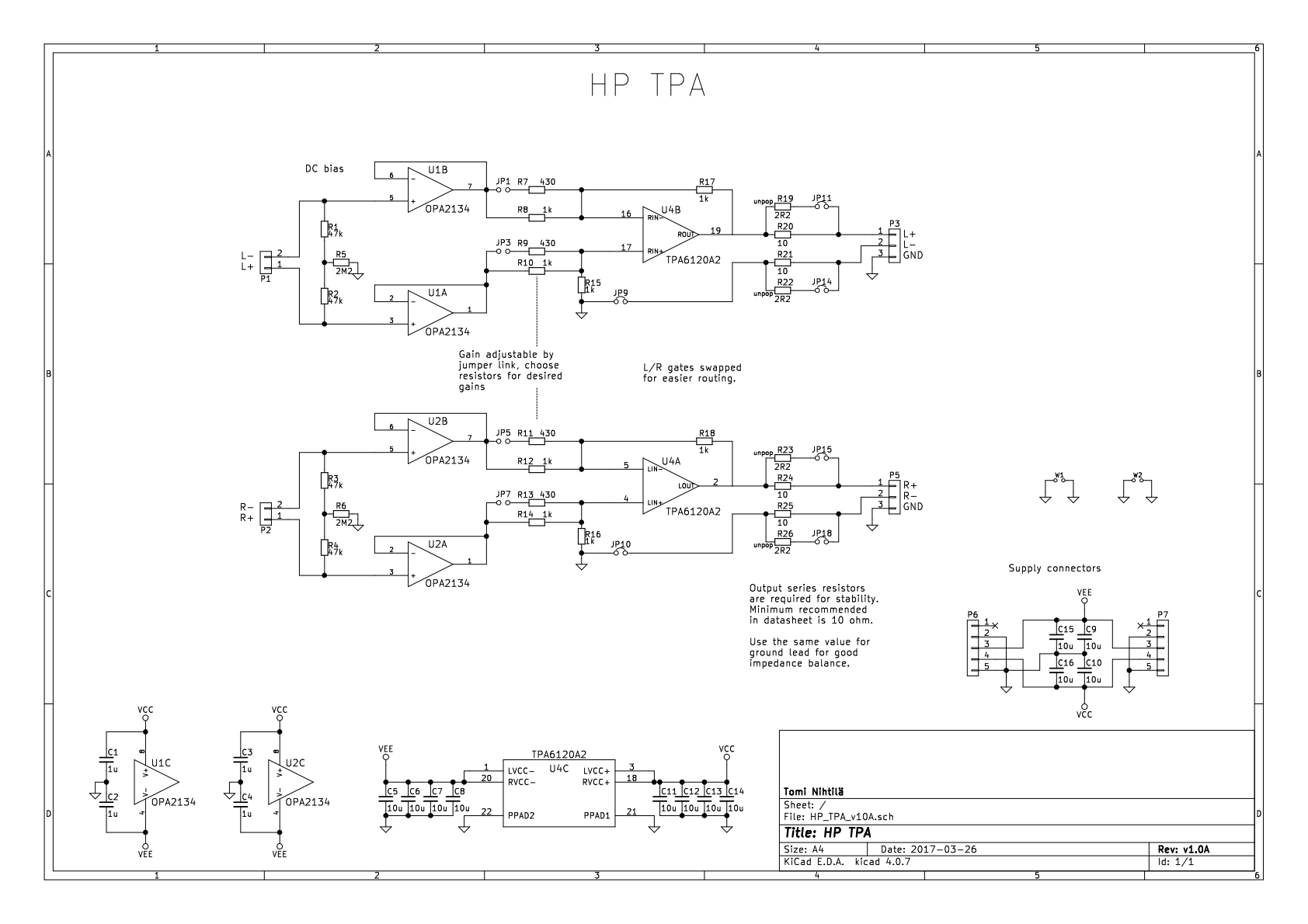 Note that OPA2134 is a FET-input opamp and therefore has very low input bias current (typical 5 pA). Bias current drawn through very high 2M2 resistor will cause common-mode DC level (which does not really matter) and difference between input currents (= input offset current) through 47k resistors may cause DC offset at the output. These currents in FET-opamp are almost unmeasurably low but in BJT-opamp the case could be different. At least something to check if changing opamp models.

There are two selection points by jumper links: gain can be set to 0 dB or around 10 dB (430 in parallel with 1k), and output impedance can be set to 10 ohms or 1.8 ohms with shown resistors. TPA6210A2 datasheet recommends at least 10 ohms for stability but generally we want as low as possible. This leaves some room for easy experimentations. Note that output resistors are placed both in hot and cold (ground) outputs for proper balanced interconnection.

This is a 5×5 cm relatively straightforward 2-layer board.

There are two holes provided for TPA6210A2 thermal pad. This way it is possible to solder the thermal without hot air, just by using a soldering iron. You just need to heat it a lot and ensure the thermal gets soldered. With this approach I advise soldering the IC before anything else.

Output resistor were set to 10 Ω as it is the minimum suggested by TI.

From now on, these cases are referred with numbers 1-5.

Noise floor here depends not only on gain but also load impedance. Recorded noise floor is

Datasheet states TPA6120A2 noise to be 0.9 μVrms in audio band with 0 dB gain and 16 Ω load. OPA2134 noise voltage density is 8 nV/√Hz, giving 1.1 μVrms in audio band. Thus on paper the noises are quite similar in magnitude but opamps are main contributors. I did a quick noise analysis in LTspice where TPA6120A2 (model not available) was replaced with an ideal opamp. The results are within 1-2 dB of the noise floor measurements above. While TPA6120A2 is current feedback amplifier and noise adds up slightly differently, this gives an indication noise from opamps and resistors is probably higher than TPA6120A2.

From these we can derive output signal level when input is 2 Vrms (6 dBV):

Corresponding output power can be seen in THD+N vs. power graphs below.

Now we can determine SNR by taking difference of the noise floor values and these signal levels, both in dBV, rounded to the nearest dB:

Overall, very good numbers. Note that these are non-weighted, A-weighting will add 2-3 dB!

THD+N are swept from 100 mVrms to 2 Vrms input as 2 Vrms seems reasonable maximum input value. For even better numbers one could drive higher signal but it may not be reasonable anymore if no source gives that high level. Even 2 Vrms is quite high for home equipment but it is the default 0 dBFS level of my H-DAC, for example.

300 Ω shows the lowest distortion but also lowest maximum power, as expected. Into 32 Ω and 16 Ω TPA6120A2 has this weird THD+N shape that it first increases and then starts decreasing again, I saw this in Addon H-PreAmp board as well. Maximum output power remains the same with 32 Ω and 16 Ω loads as high output impedance (10 Ω) eats the gain difference. 0.006 % (-84 dB) at 500 mW is quite good number although distortion is higher in lower levels. 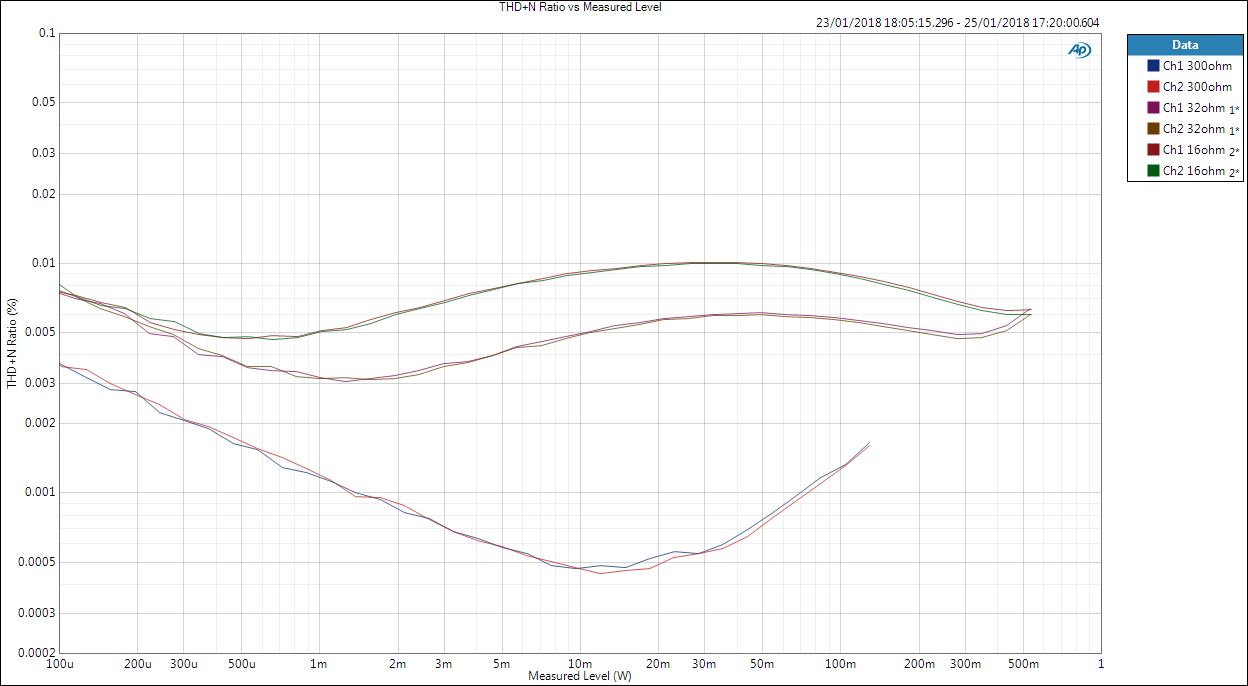 Here graph shape remains the same but it is shifted. Maximum output power is significantly lower but some smaller power levels have lower THD+N. There are no clear advantages here in using lower gain due to odd distortion profile. As was shown, also SNR is higher with higher gain setting. 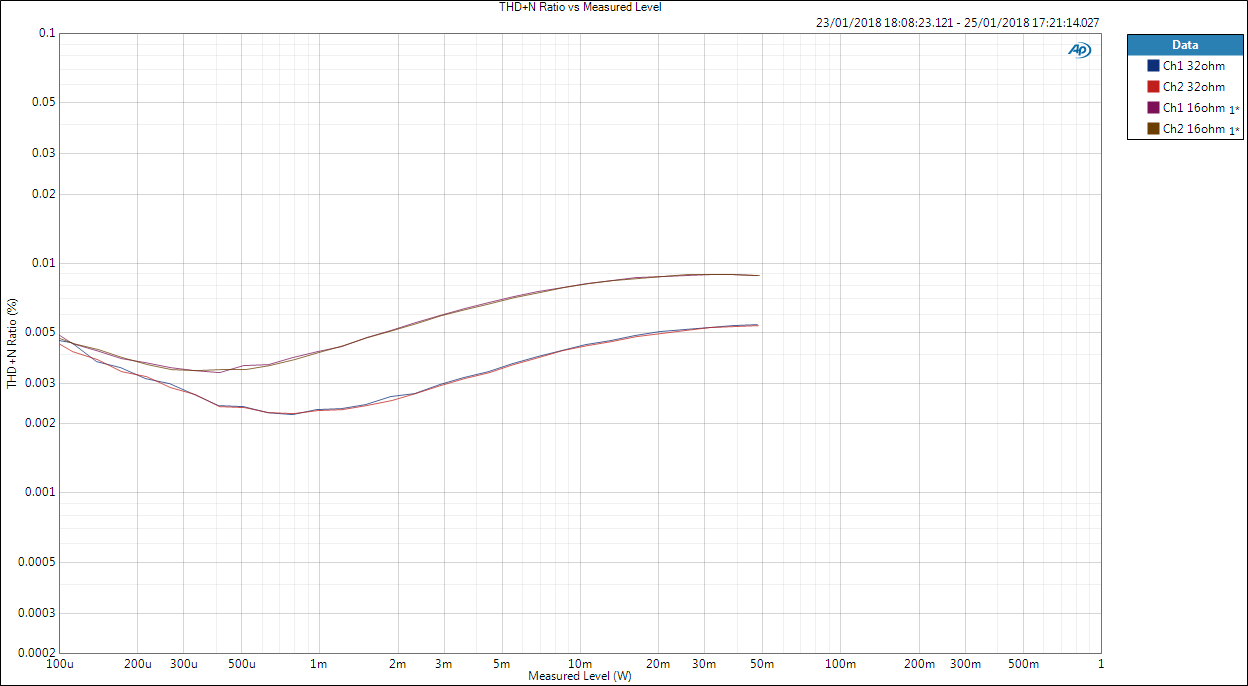 Crosstalk is good to very good but not superb. Higher frequency crosstalk is quite independent of load and increases 6 dB/octave, an indication of capacitive coupling. Lower frequency crosstalk gets worse when load current increases. I do not understand exactly why it is lower in between but this is almost identical to TPA6120A datasheet graph so crosstalk is limited by the IC itself. At least it is the lowest in range of frequencies our hearing is the most sensitive.

Note that this is using balanced output on HP MoBo, otherwise crosstalk is poor. 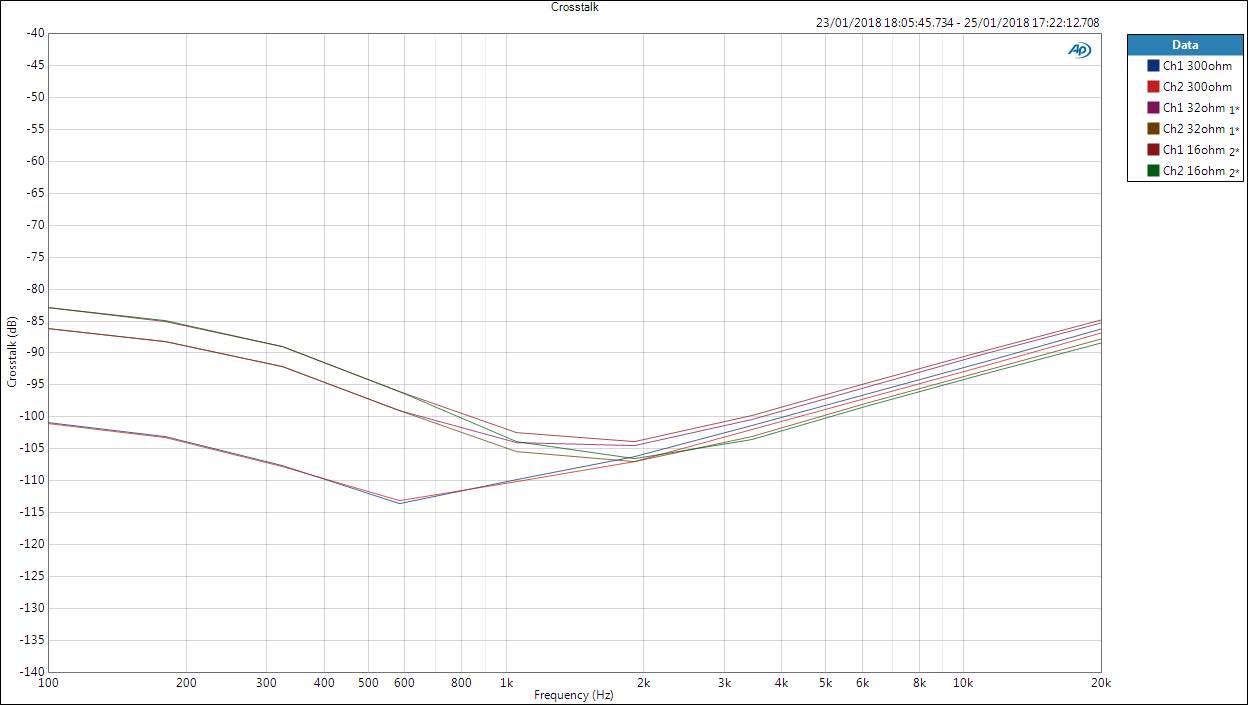 TPA6120A2 performance is solid but not exceptional. I have not measured other single-IC headphone amplifiers but I have understood that it is exceptional in its category, hence very easy way to create a good headphone amp.

We could probably get higher SNR by using better opamp buffers. Datasheet claims 128 dB SNR; compared to numbers here one must consider at least weighting filter and used signal level – SNR figures can be boosted by using higher signal level if noise remains the same.

THD+N figures are significantly weaker than in datasheet. I cannot guess what could be the reason for that. I have measured similar numbers in Addon H-PreAmp. It is unlikely I will do more investigation on this as I already have better amplifier modules (HP Buf).

One big question is also the recommended high (minimum) output impedance of 10 Ω. Datasheet clearly states we should not go lower than that – of course we could try but it can lead to instabilities. Amplifier output impedance should be an order of magnitude lower than load impedance to not cause frequency response alteration or reduced damping. NwAvGuy has written excellent post regarding these impedances. It would be interesting to measure headphone frequency responses using different amps.