Addon BalOut is a small addon board to be stacked on H-DAC to add balanced XLR outputs. It works along with the unbalanced RCA outputs on H-DAC and audio performance is high enough not to be the limiting factor of the H-DAC system. 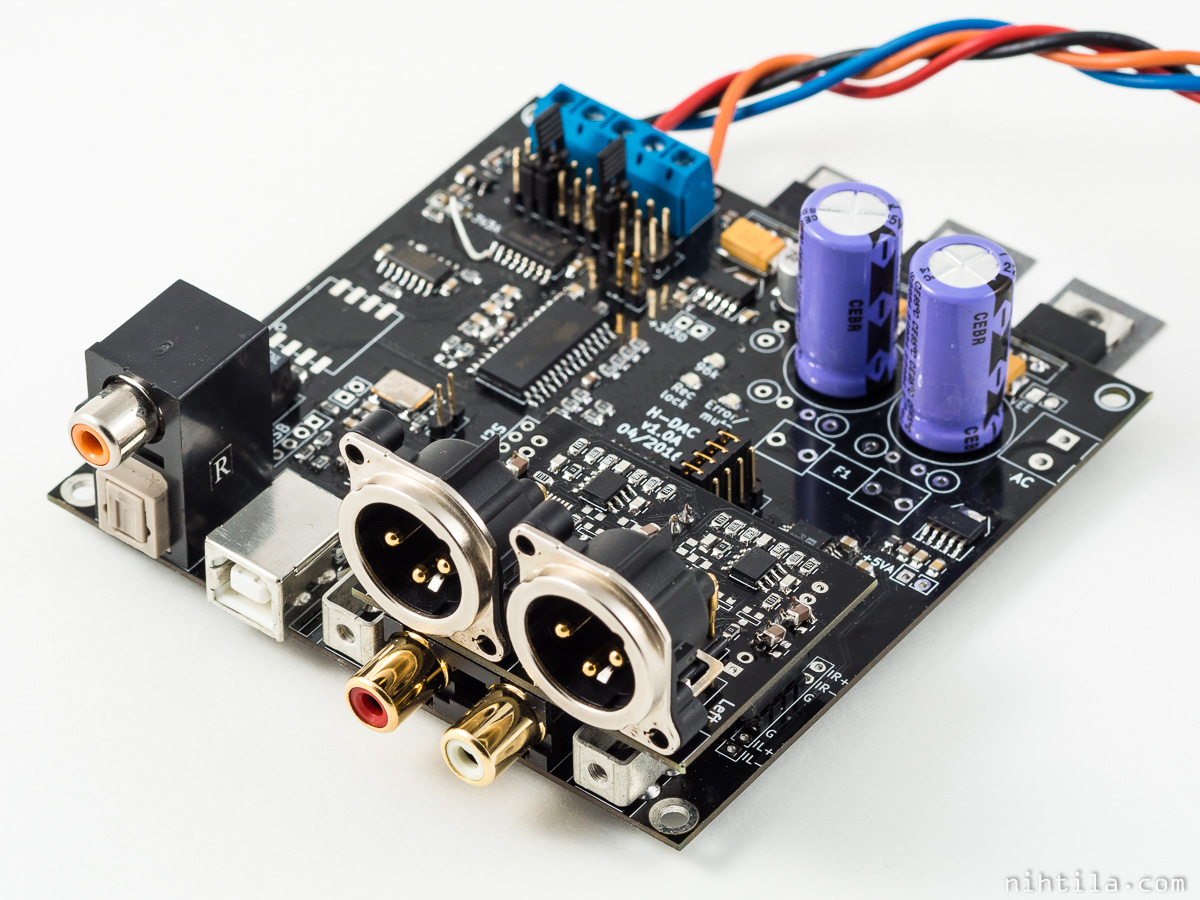 Differential buffer removes common mode DC voltage and filters out high frequency components after DAC; it is basically the same filter circuit as in H-DAC single-ended output stage but in differential configuration. Component values are the same as it forms a third order filter together with the I/V-stage in H-DAC. Therefore, if signal level or filtering frequency is to be changed, the whole third order filter must be considered. This can be done with a help of the instructions, component calculator, and LT Spice simulation files in H-DAC page (these files are for single-ended filter design but differential is just the same filter copied for positive and negative signals).

THAT1606 balanced driver offers very high CMRR (Common Mode Rejection Ratio), in a way trying to mimic “the real” balanced driver by transformer. This can offer significant benefits in noise and interference suppression in professional environment with long interconnects and hostile EMC-environment. However, as can be seen in the measurements section (and also in THAT1606 datasheet), its performance in terms of THD+N and especially noise level is significantly weaker than the rest of the components in H-DAC + Addon BalOut system. Therefore, if high CMRR is not specifically required, THAT1606s can be bypassed with resistors R21-R24, also acting as series resistors for differential buffers.

Protection and RF filter components are suggested in the THAT1606 datasheet and placeholders are added for these optional components. In the measured prototype these are not used. L1-L4 should be shorted with 0-ohm resistors if ferrites are not used. 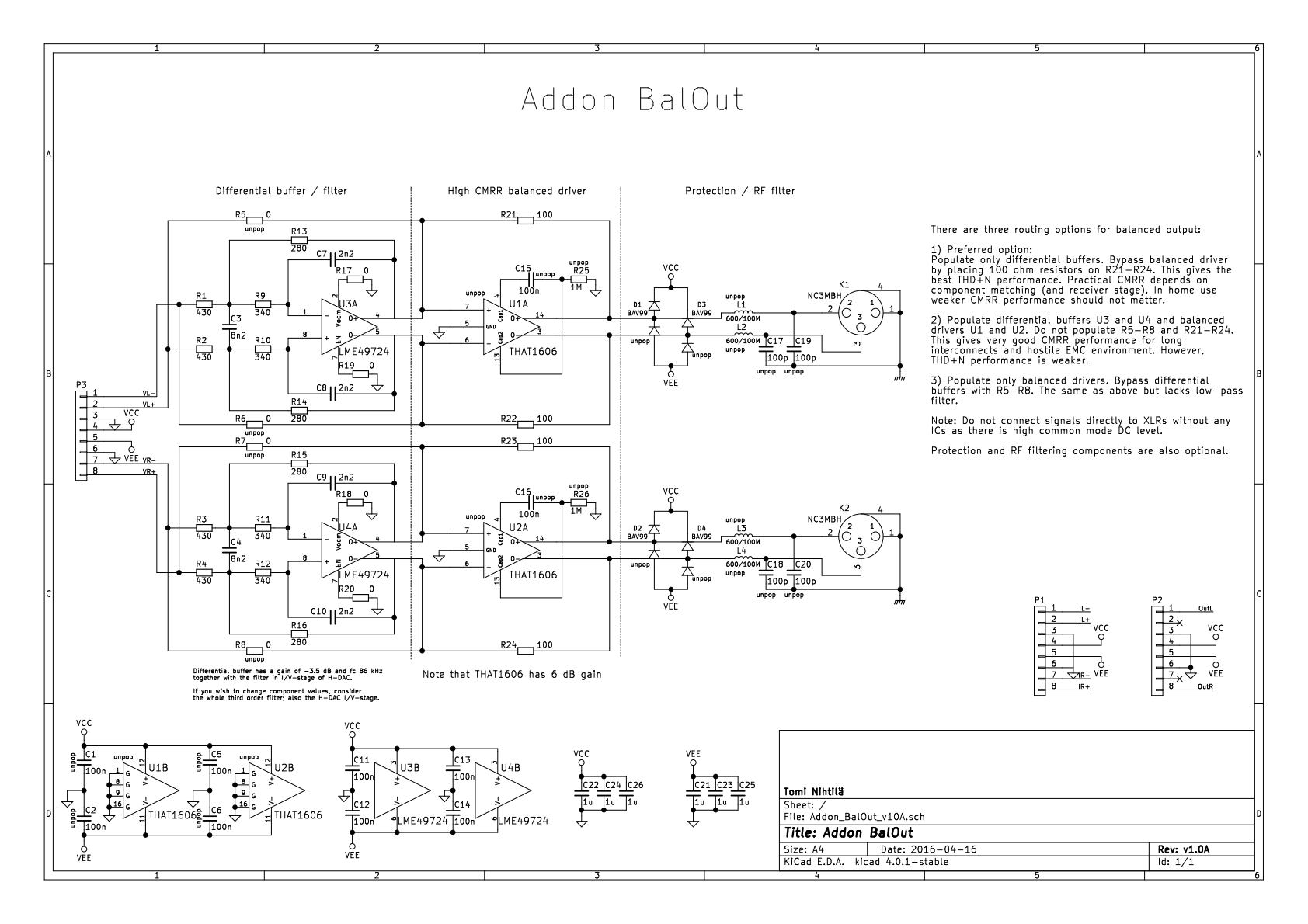 The design relies mostly on 0805-sized SMD components. All components are ‘basic’ ones, nothing exotic. Resistors are thin film type, filter capacitors film, and all other small capacitors ceramic.

Note that in the image below I have used 1206-sized decoupling capacitors directly on pinheaders P1, P2, and P3, as the footprints are for 0805 and I did not have the correct size caps at hand. 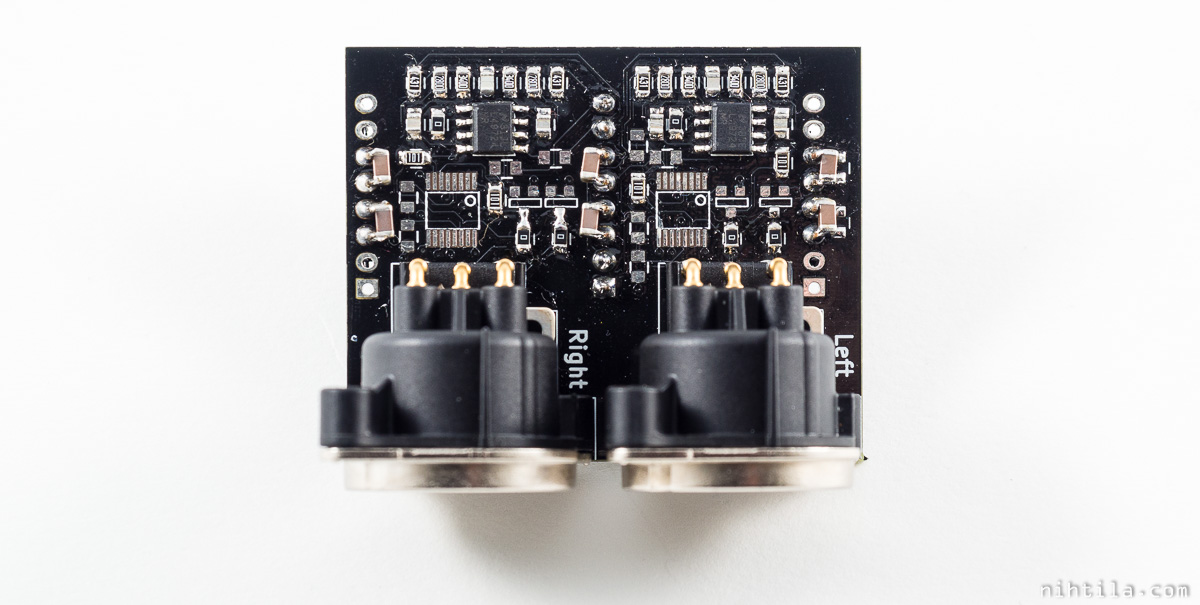 PCB is 4-layer with the following stackup: signals, ground, split power, and signals. Layout design is not described in detail. This design is quite simple but as it is also small, 4-layer board was used.

Below are layout images 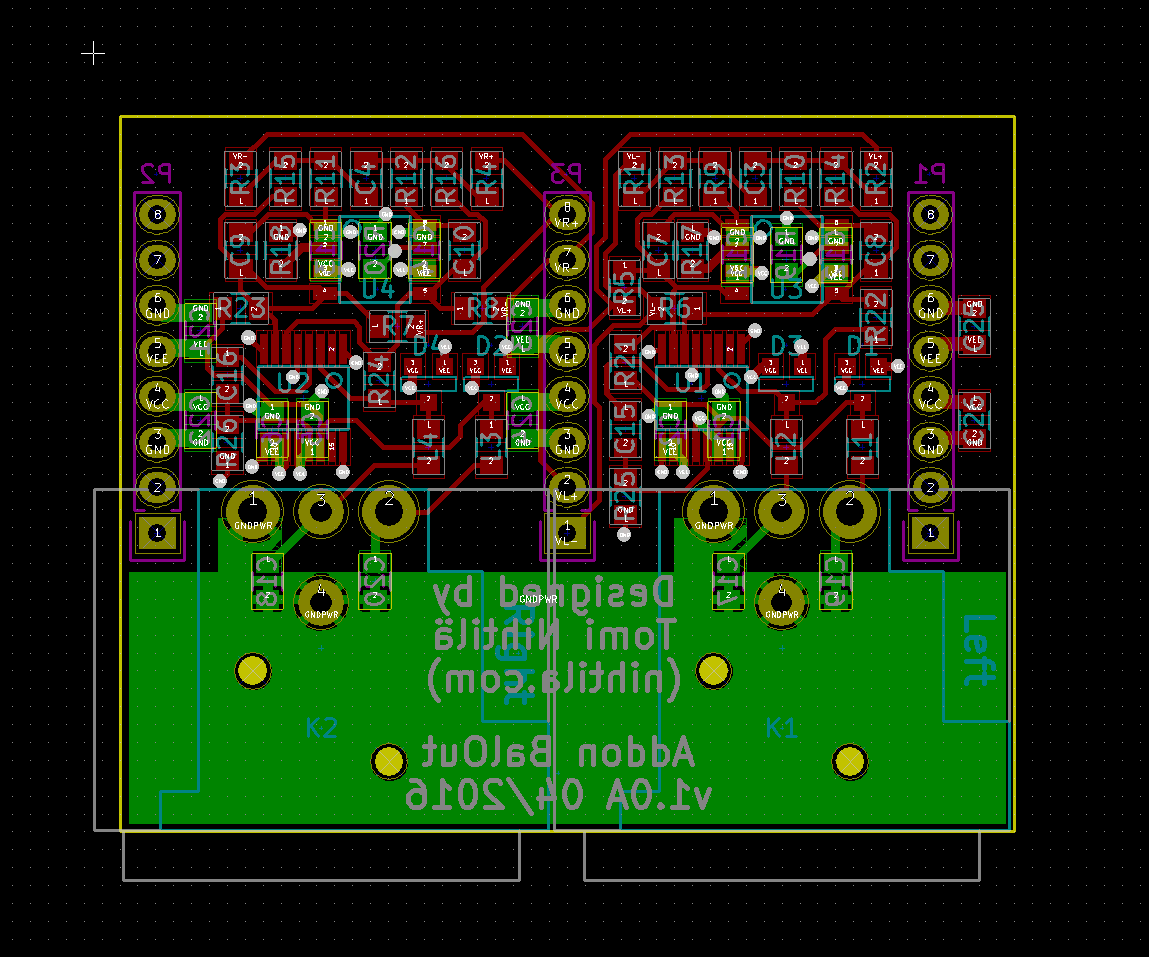 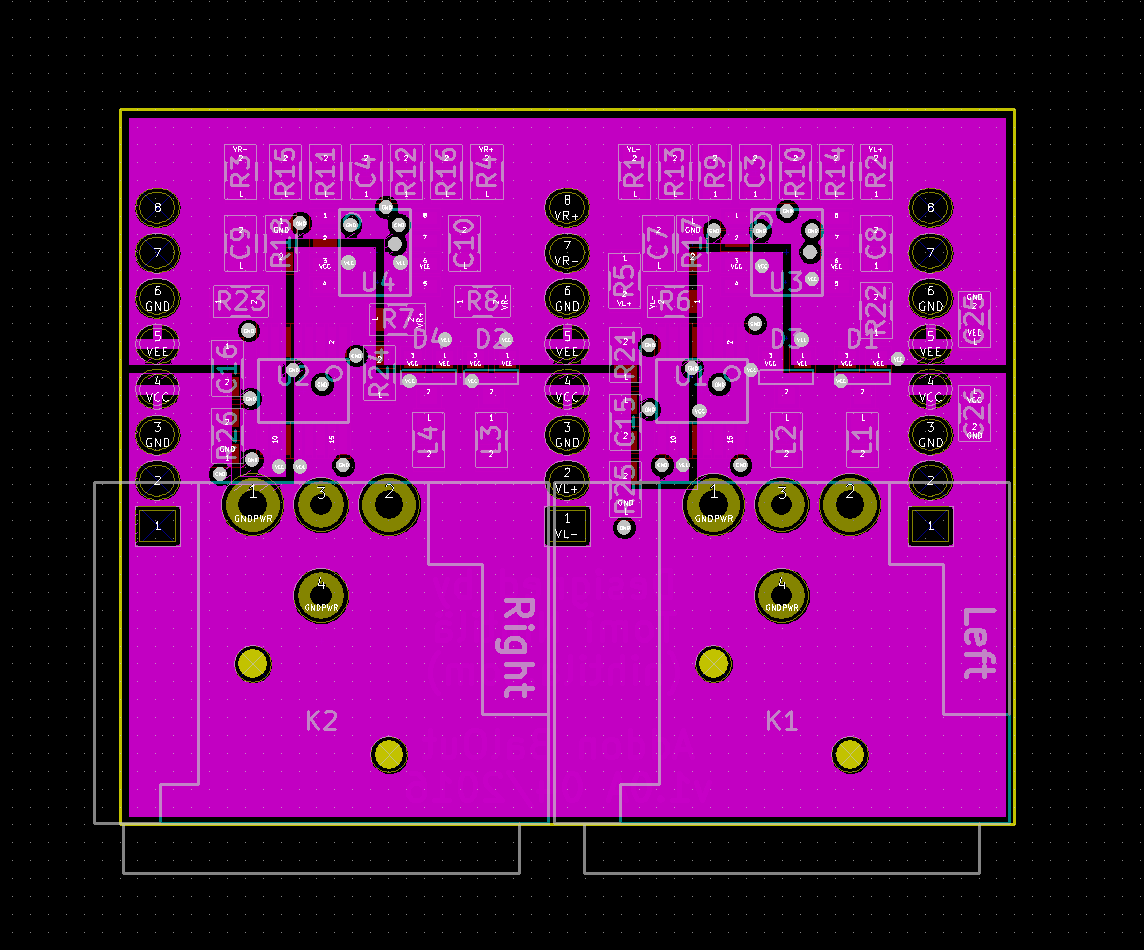 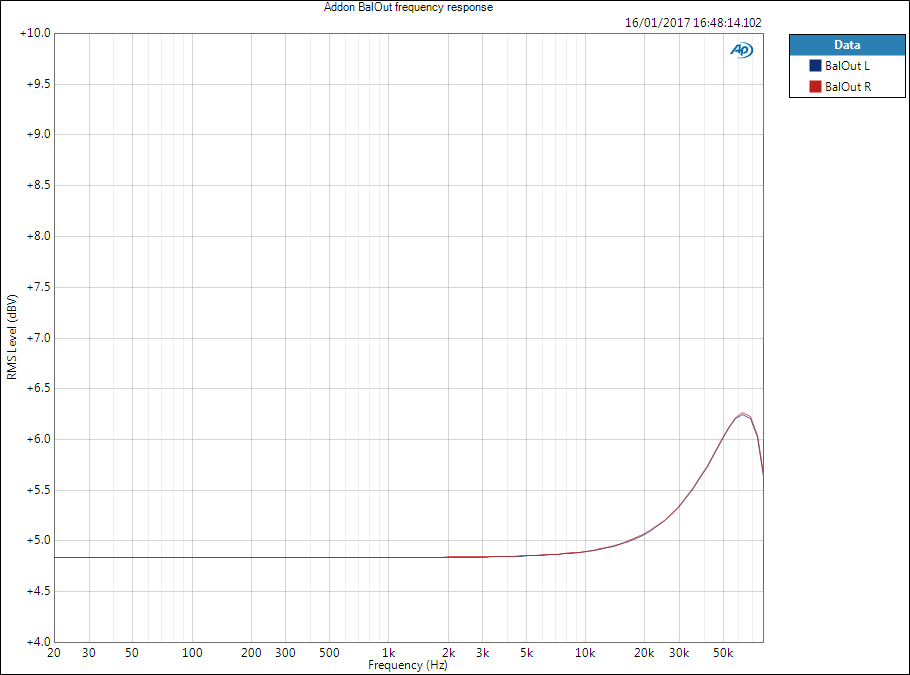 Below is H-DAC frequency response: I/V-stage (top curves), and single-ended (RCA outputs) and Addon BalOut (XLR outputs) which are identical. It can be seen that as I/V-stage has first order low-pass filter, its response starts to roll-off already at audio band. Therefore, the filter stages in BalOut (or in single-ended stage of H-DAC) compensate this roll-off by boosting higher frequencies. These together form a third order maximally flat (Butterworth) filter. The overall output response of single-ended and BalOut are indentical (lower curves) and flat within the audio band. 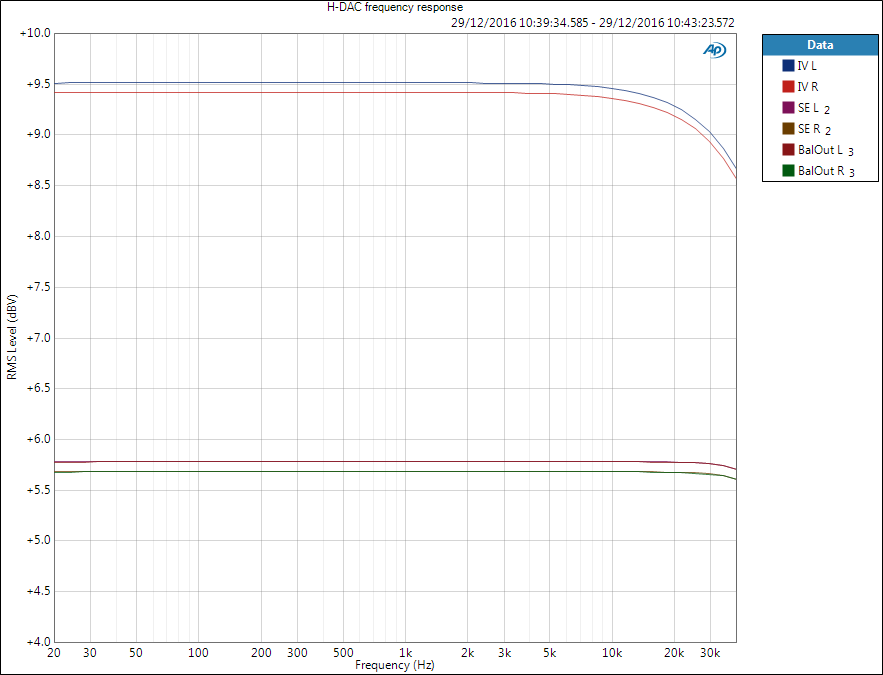 THD+N vs. amplitude curve at 1 kHz is shown below with measurement bandwidth of 20 kHz and output signal level 1.3 dBV. There is around 1 dB difference between channels but noise floor is around -115…-116 dBV (A-weighted -117/-118 dBV). Note that x-axis is generator level but as BalOut has a gain of 0.65, output voltage is 0.65 times the generator level. When distortion starts to dominate, the source of that is in fact the measurement instrument.

Here it is very clear that noise performance of THAT1606 is significantly weaker than LME49724 opamp. However, it is still good to remind that we are dealing with noise level of around 8 micro-volts. 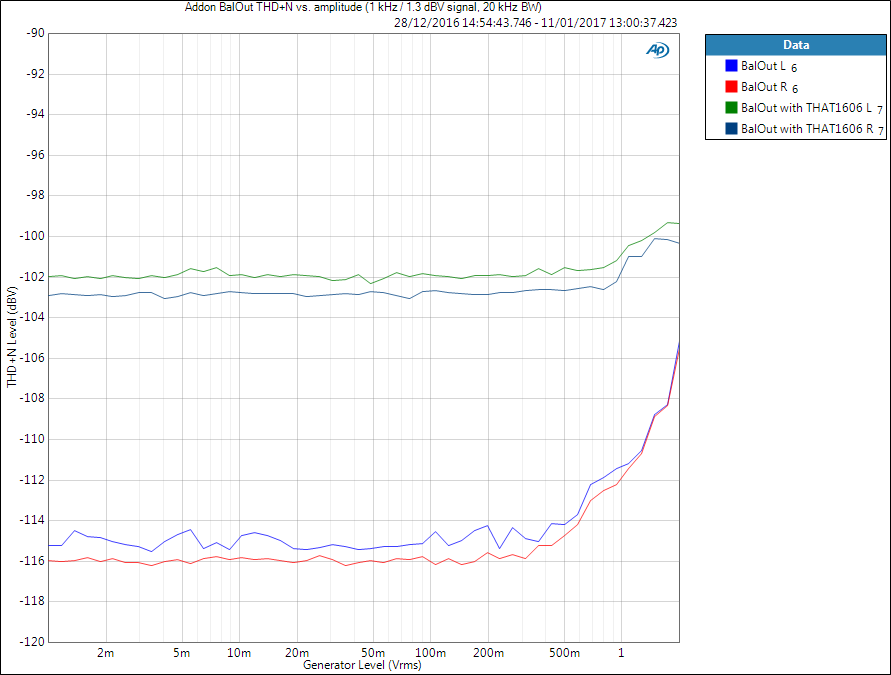 Note that this is a ratio between the output level and THD+N level, while the graph above is absolute level. This was measured with 1.3 dBV output signal level and 20 kHz measurement bandwidth.

THAT1606 does not lose as much here, or at least it cannot be measured when the opamp performance is likely limited by the measurement instrument. 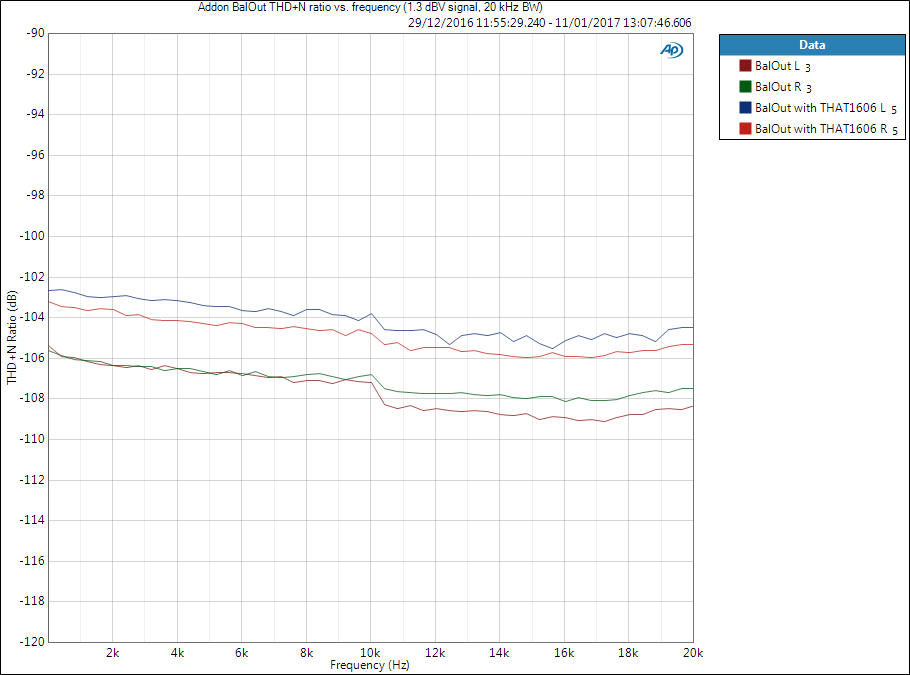 Note: Why did I use 1.3 dBV signal level in the above measurements? Well, I somehow thought I was using 2 Vrms – the same as H-DAC output level. Instead, I had 2 Vrms generator voltage. However, as the resistor values on BalOut are so small, this loads the APx output which has source impedance of 100 ohms. Moreover, the gain of BalOut is actually negative: -3.5 dB. All this leads to output level of 1.3 dB and I didn’t bother measuring again as it does not really matter. After all, I am not lucky enough to have Audio Precision at home.

Signal ‘leaking’ between channels can be quantified by crosstalk measurement, seen below. 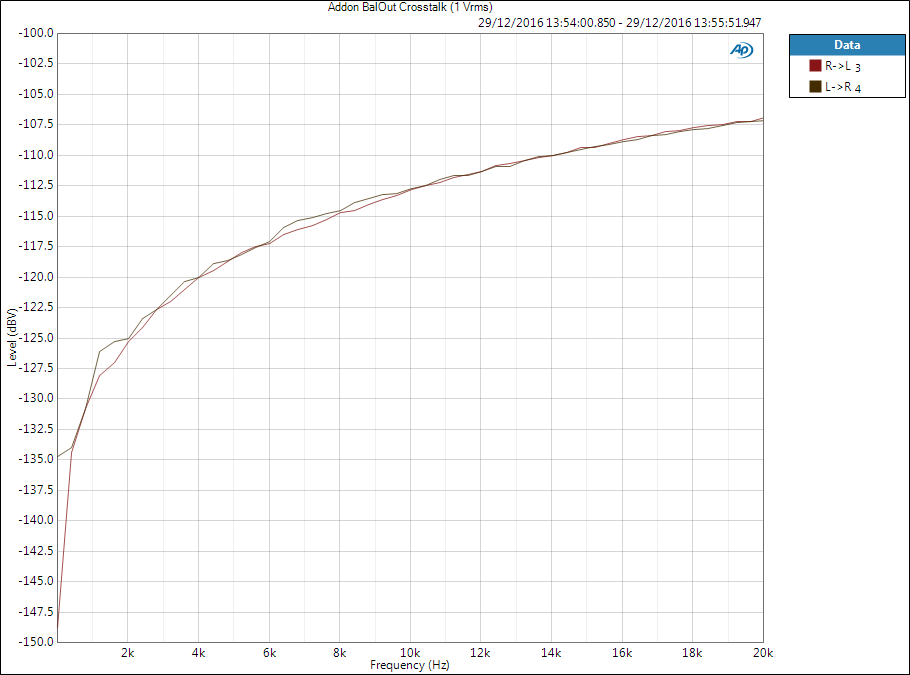 I quickly checked THD+N vs. amplitude, THD+N vs. frequency, and crosstalk with BAV99 protection diodes, ferrites, and 100 pF capacitors populated at the output. I did not see any differences in the measurements. Therefore, from signal quality perspective it should be safe to use these components.

Measurement results are good. There is slight difference between channels. To be honest, I was expecting to hit the noise floor of the measurement instrument which is -118 dBV (non-weighted) but did not quite get there. For some reason my measurement setup was also picking noise easily, I may try to figure out the root cause for that at later time.

After all, this module is not designed to be used on its ow. All that matter is that it does not restrict the performance of H-DAC.

Update: I have measured BalOut also with OPA1632 instead of LME49724 and created a separate post for that.

Schematics / PCB – known errors, bugs, and changes for next version